Using suites of criteria to recognize pre-Flood, Flood, and post-Flood boundaries in the rock record with application to Wyoming (USA).

Proposes a method in which multiple criteria are applied to distinguish pre-Flood, Flood and post-Flood rocks. The method is applied to the rock sequence in Wyoming, USA, as a case study. 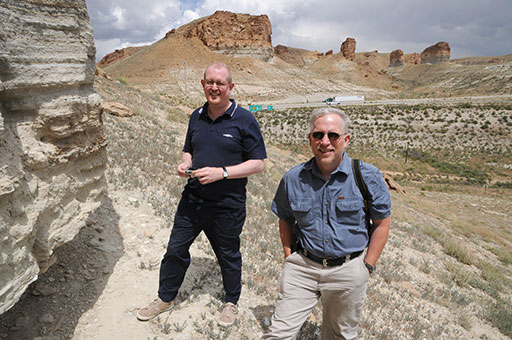 Paul Garner and Dr John Whitmore examining outcrops of the Eocene Green River Formation in Wyoming. These sediments were deposited in and around a lake that existed in this area in early post-Flood times.

This study proposed a method in which suites of criteria could help to establish pre-Flood, Flood and post-Flood strata. The method is independent of chronostratigraphic indicators (that is, radioisotope dates and zone fossils); instead it relies on other criteria. Application of this model was made using the lithostratigraphic section from Wyoming and vicinity (USA) as an illustration of how the criteria model should be used. We concluded that in our Wyoming section, the Flood/post-Flood boundary falls at or near the transition from the Lance Formation to the Fort Union Formation (the Cretaceous/Tertiary boundary occurs after the Lance). Not only can this model be used to help more confidently determine Flood boundaries, but it might be used as a test to see whether we can rely on chronostratigraphic or biostratigraphic units to determine Flood boundaries elsewhere. Properly understanding which strata belong to the pre-Flood, Flood, and post-Flood periods by recognizing large-scale patterns or suites of criteria, will help us more fully understand the biostratigraphic patterns found within the rock record.

The study was presented at the Sixth International Conference on Creationism (Whitmore and Garner 2008).