All members of the woodpecker family (woodpeckers, wrynecks and piculets) belong to a single created kind. Some “typical” traits of modern woodpeckers, such as those associated with insect-eating, may only have been expressed when the family diversified after the Flood. 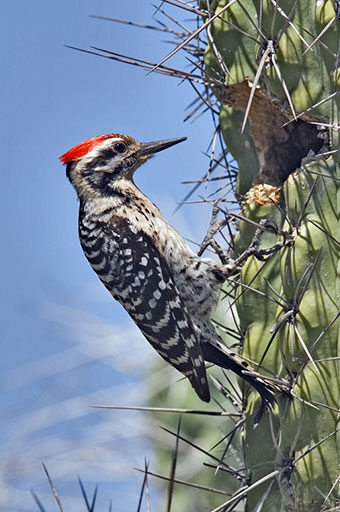 The Picidae (woodpeckers, wrynecks and piculets) comprise a family within the near passerine order Piciformes. Creationists have often appealed to the unique anatomical and behavioural specializations found in woodpeckers as evidence of divine design. However, until this study no baraminological studies of the group had been undertaken.

A dataset of 50 morphological characters (mostly related to hind limb musculature) and 20 taxa (12 picids and eight outgroup taxa) was evaluated using baraminic distance correlation (BDC). The results showed that the woodpeckers, wrynecks and piculets form a well-defined group united by significant positive correlation and separated from seven of the eight outgroup taxa (barbets, toucans and toucanets) by signicant negative correlation. The eighth outgroup taxon, the honeyguide Indicator, was neither positively nor negatively correlated with the other taxa in the dataset. Multidimensional scaling (MDS) applied to the baraminic distances revealed an orthogonal pattern with ingroup taxa arranged on one axis and outgroup taxa on another, a result that has previously been interpreted as mitigating conclusions of negative discontinuity. However, repeating the analysis without the genus Indicator, which formed one of the axes, did not change the negative correlation between the picids and non-picids, suggesting that the result cannot be dismissed merely as an artefact of the multidimensional scaling pattern.

The results suggested that all members of the Picidae constitute a single holobaramin. This conclusion is consistent with hybridization data indicating the monobaraminic status of at least 12 genera in six of the nine tribes within the Picidae. Since the picids are holobaraminic, and since not all members of the group possess the full range of “typical” woodpecker characters, this suggests that at least some of these morphological and behavioural traits arose by mediated design (in this case, insectivory) and suggests that standard creationist design arguments concerning woodpecker anatomy and behaviour need to be modified.

The results of this study were published in the Journal of Creation Theology and Science Series B: Life Sciences (Garner 2014).