This study began the task of identifying the created kinds of dinosaurs using the methods of statistical baraminology. It also indicated the need for samples of morphological data that are as holistic as possible in order to successfully identify the created kinds. 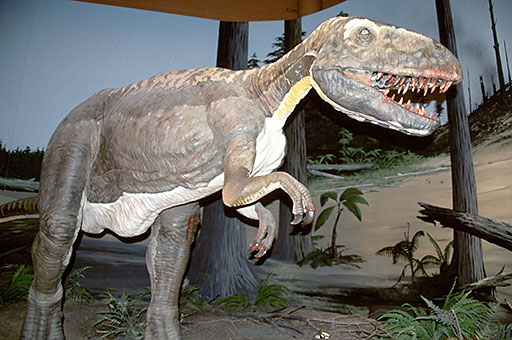 A restoration of the theropod dinosaur Neovenator salerii on display at the Dinosaur Isle Museum, Sandown, Isle of Wight.

Much baraminological research has been based on the baraminic distance correlation (BDC) test introduced by Robinson and Cavanaugh (1998), but there has been little serious assessment of the value of the BDC test itself. This study attempted to evaluate the utility of BDC for detecting putative discontinuities among fossil groups, where discontinuity is recognized by significant, negative BDC between two groups of taxa. Assuming that the rank of family is an approximation of the holobaramin, the BDC test should detect discontinuity when more than one family is present in the set of taxa and characters being evaluated.

For our evaluation, we selected nineteen character sets derived from Weishampel et al. (2004), Williamson and Carr (2002), and Sullivan (2003), all of which focus on high-level classification of dinosaurs and consequently contain multiple families. By focusing exclusively on taxa known only from fossils, all character matrices also contained many unknown character states, which could hamper efforts to detect discontinuity using BDC.

The results of this study were presented at the 2011 Creation Biology Society conference (Wood et al. 2011).

Robinson, D.A. and D.P. Cavanaugh. 1998. A quantitative approach to baraminology with examples from the catarrhine primates. Creation Research Society Quarterly 34:196-208.