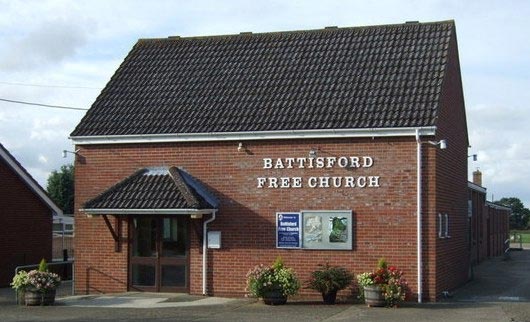 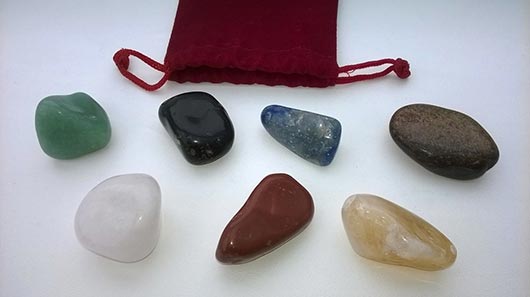 ‘Stones on show so that others will know.’

On Sunday 12th May Matthew Pickhaver spoke at Battisford Free Church in Suffolk. In the morning service, besides giving an update on our work, his theme was ‘stones on show, so that others will know’ with preaching from Joshua and a Bible overview object lesson for the youngsters.

In the evening he gave his recently-updated presentation, ‘Was there really a world-wide flood? Evidence from science and Scripture’. There were some visitors present and questions afterwards covered topics such as whether the ark has been found, salt in the sea, the age of the earth and ice cores. 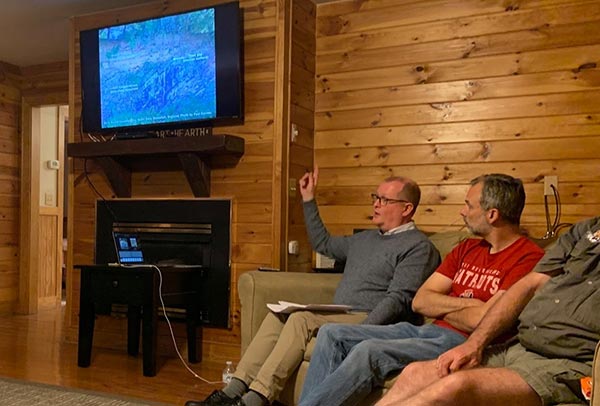 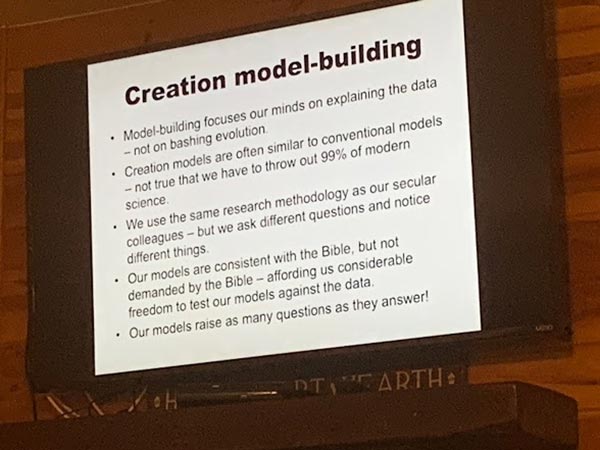 A slide from Paul Garner's talk. 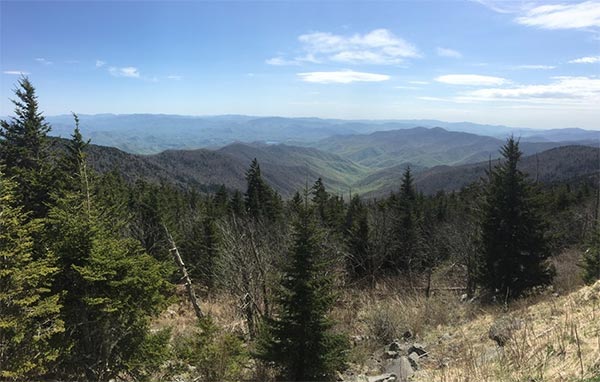 What are the hardest problems in geology that we face as creationists? How should we seek to resolve them? What are the pitfalls – and the opportunities? These were among the questions addressed by Paul Garner at the Smoky Mountains Creation Retreat in Pigeon Forge, Tennessee, in late April.

The retreat, organised by Core Academy of Science and now in its fifth year, provides an opportunity for students and scholars to discuss difficult issues in a friendly and supportive environment.

Paul began with his own experiences of wrestling with hard problems as a student, and showed how new discoveries have helped to resolve some of them. He suggested a research methodology that creationists should adopt when faced with hard problems and highlighted the success of this approach in a series of case studies. But he also gave examples of hard problems that remain unresolved – and the exciting research opportunities they represent.

While in the USA, Paul also visited the Core Academy of Science offices in Dayton, Tennessee, spoke to Dr Marcus Ross’ origins class at Liberty University in Virginia, and spent a few days working with Dr John Whitmore at Cedarville University in Ohio. Paul was encouraged by students at both Liberty and Cedarville expressing their appreciation for his book, ‘The New Creationism.’ 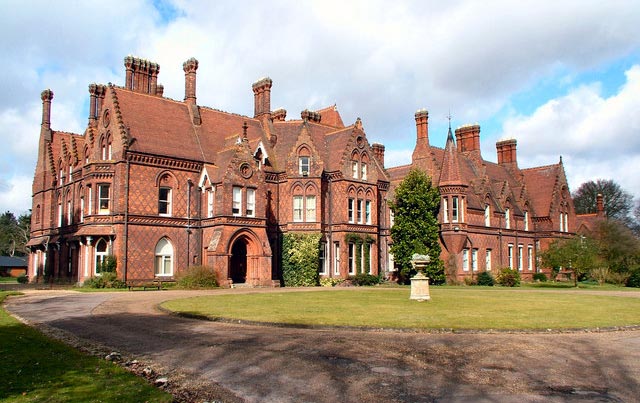 On April 6th Matthew Pickhaver led two workshops at the ‘Saved2Serve’ Grace Baptist conference for 15–25s at All Nations College in Ware, Herts. His subject was ‘Mission Dawkins: How do I reach atheists or those who say ‘science has killed God’?’

After discussing some contradictory ‘new atheist’ statements, we looked at the history and nature of science and faith, before outlining the ‘five Cs’ of evidence for God: creation, conscience, the complete scriptures, Christ and conversion. Finally we considered how to answer some specific common objections.

With four different workshops to choose from, about half of the 70 attendees came to these sessions, asking thoughtful questions or sharing their own helpful observations, including about the meaning of Romans 1:18–20. It was encouraging to see such zeal for God’s truth in the next generation. 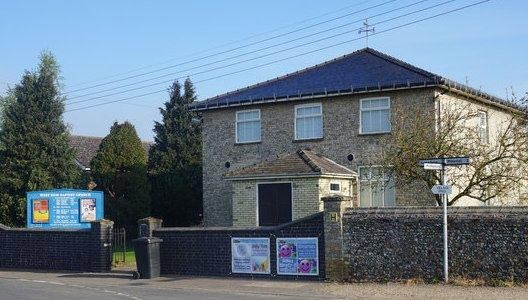 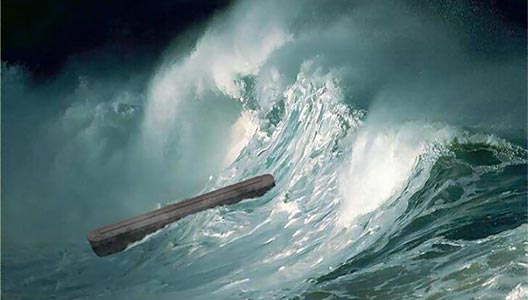 Material used to answer the question 'was there really a world-wide flood?'

On April 3rd Matthew Pickhaver spoke at West Row Baptist Church in Suffolk. After giving a report on the work of BCT, he addressed the question, ‘was there really a world-wide flood?’ using evidence from science and Scripture.

About 35 attended and a useful Q&A session followed, covering topics such as the ark itself, soft tissue in fossils, human evolution, death and the fall, creation education, worldviews and scientific consensus.

Encouraging feedback was received afterwards and enthusiasm shown for the resources available. 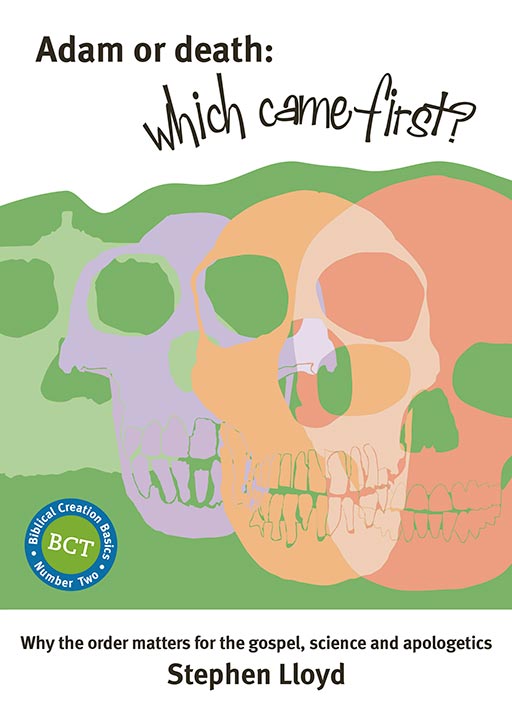 Adam or death: which came first?

We are delighted to announce the publication of the second booklet in our ‘Biblical Creation Basics’ series: Adam or death: which came first? In this Stephen Lloyd provides a summary of our Biblical Creation position, and crucially explains the methodology that lies behind it. Christian theology is not abstract but derives from events in history: the storyline of the Bible. For example, Jesus’ death is the solution to the problem introduced by Adam’s sin. The right sequence of events is crucial to maintain the coherence of the story: Adam exists before death enters the world. Applying this chronological method provides a robust theological basis to demonstrate that the gospel is not consistent with the sequence and long ages of evolutionary history.

Stephen then goes on to explain the method by which an alternative scientific account of earth history can be developed that is consistent with the Bible’s storyline. Mainstream science involves building scientific models, and applying the same method allows creationists to undertake fruitful research that makes sense of the evidence we find. Adopting these methods in our theology and science provides a more holistic and coherent basis from which we can address the pressing objections Christians face today, in particular attacks on the character of God and human identity. In all these areas Stephen shows why our Biblical Creation position is immensely attractive.

The contents of the booklet were originally published in the Affinity journal, Foundations. Adam or death: which came first? reformats the paper in booklet form making it easy to read and pass on to others. It also adds a Foreword by the new Principal of London Seminary, Bill James who concludes, “…this little booklet brings clarity, and confidence in the gospel.” 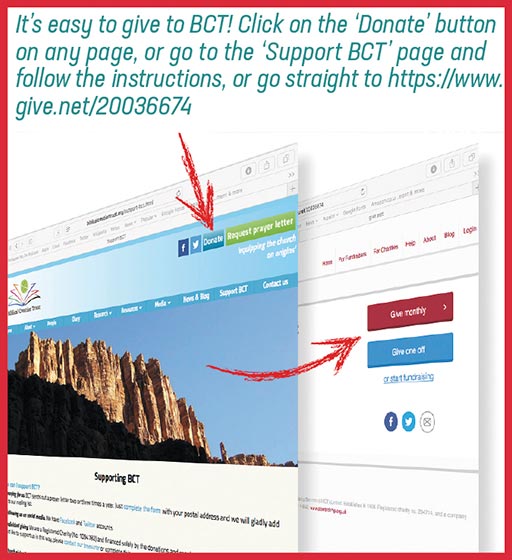 It's easy to give to BCT!

We are delighted to announce that one of our supporters has offered to match new giving to Biblical Creation Trust over the next year. Single donations over £100 or new standing orders of over £10 per month will be doubled in value up to a total of £10,000.

New givers will also receive a free gift of the recently released film Is Genesis History? If as an existing regular giver you would also like to receive this gift please get in touch.

Can you spread the word? 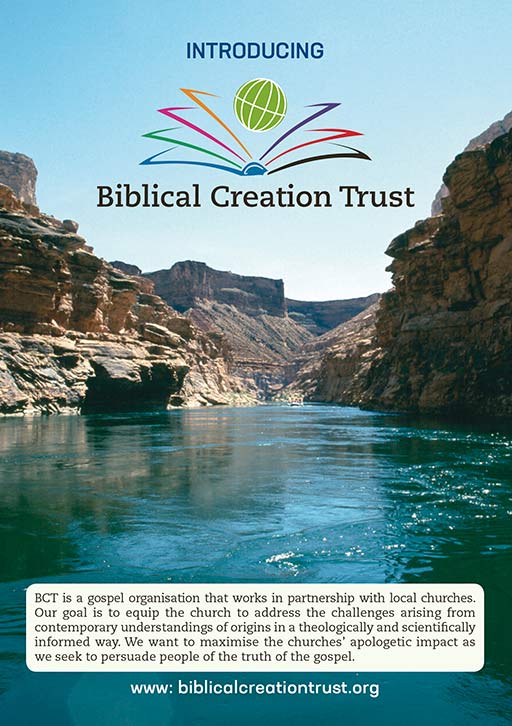 Can you spread the word?

In our latest prayer letter we shared details of our vision and plans for the future. One of our aims is to broaden our supporter base.

One of the ways you can help us do this is to spread the word about BCT by distributing copies of our new leaflet.

‘Introducing Biblical Creation Trust’ explains who we are, what we’re about, and how individuals and churches can partner with us.

Please let us know how many copies you’re able to distribute and we’ll gladly send them to you. Just contact our administrator, Debra Garner, on 01353 721578 (answerphone) or by email. 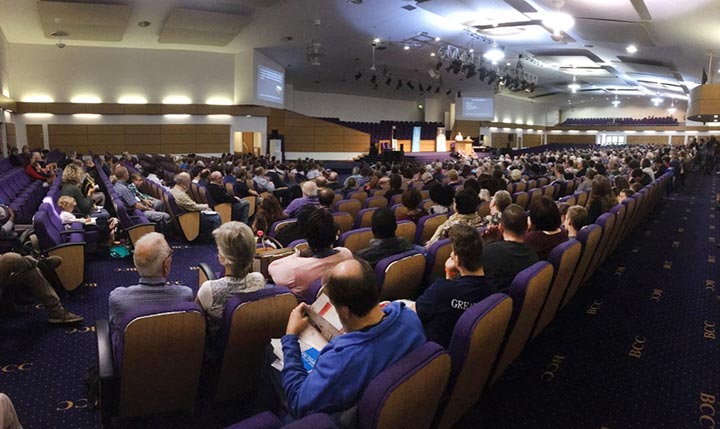 The programme entitled ‘Inspiring a Genesis Reformation’ was instigated to echo the Reformation of 1517’s standing on the authority of the Scriptures especially with regard to the early chapters of Genesis. Each generation, Ken Ham reminded us, needed to measure itself against the standard of Scripture which the Reformers set before the church in the 16th century. The widening chasm between the secular and the biblical worldview has come to be through the ancient challenge, “Has God said?”, applied now from Genesis through to Revelation. The church, he said was complicit in this fundamental challenge over the historicity of the first man Adam and the doctrine of God’s grace achieved through the last Adam, the Lord Jesus Christ. Even science needs to become captive to the authority of the Word of God if we are to really understand what the Reformation is all about in speaking to the whole of human experience.

A line up of ten speakers pressed home the many consequences of ignoring the biblical claim of inspiration to all aspects of life, both history and experience. Dr Nathaniel Jeanson (Cell and Developmental Biology, Harvard) illustrated how science changes with increased knowledge and suggested that if Darwin knew what we now know about DNA and the genome his conclusions would have been different concerning the origin of the species. It would have been a thicket rather than a tree.

Dr Stephen Lloyd of Biblical Creation Trust, tackled the problem of loss of identity. If Adam was ‘one of many’ as evolution would claim, then his uniqueness as created in the image of God, male and female, is a myth and compounds the lostness of a current generation which is addicted to ‘selfies’. He suggested that we all need ‘identity reassignment’ in Christ as a gift, cast in the authentic image of God.

Paul Garner, geologist, also of Biblical Creation Trust, illustrated the discrepancy that is apparent between radiometric dating and the thickness of sedimentary rocks; there is a 1000-fold difference. He discussed the burrowing (‘bioturbation’) that should be present in sedimentary rocks if they had been laid down over eons but is almost completely absent compared with sediments being laid down today. 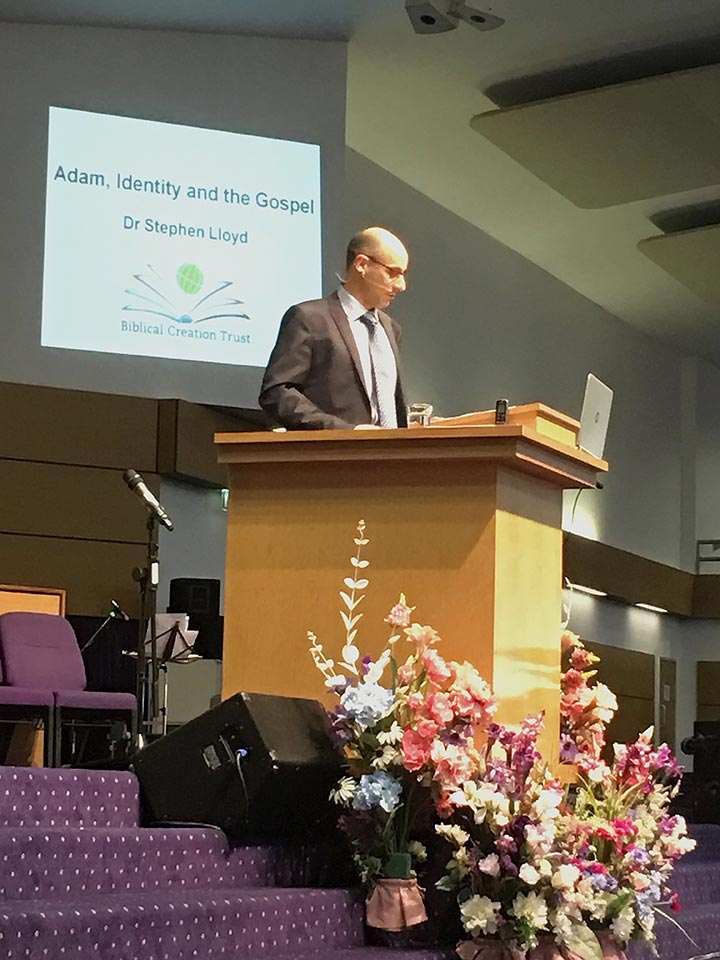 Stephen Lloyd spoke about human identity and its connection with origins. 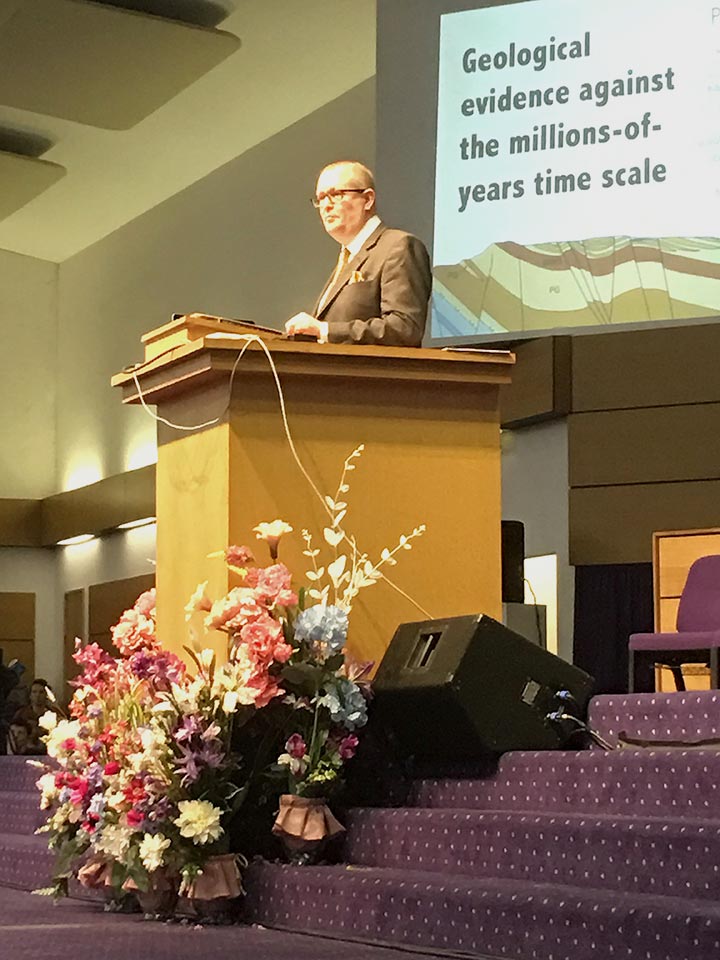 Professor Andy McIntosh dealing with the ear and Professor Stuart Burgess the eye, dealt with the myth made popular by media scientists, that both these organs showed poor design. It is not Christians who plug gaps with God but those whose god is a blind watchmaker.

Three refreshing sessions came from Dr Voddie Baucham, Dean of African Christian University in Lusaka. Drawing from early Genesis, he showed the cultural mandate of a Christian worldview and the blessing it can be if we understand Genesis to be history. One example is the seven-day weekly cycle, unrelated to any planetary motion of the solar system but pointing to God’s creation by fiat.

Dr Danny Faulkner, an astronomer of many decades, took us on a cosmic grand tour, through the epicycles of Ptolemaic cosmology to the multitude of corrections that are need to make the Big Bang work – another system of epicycles? Our rapid journey finished contemplating the unlikely event of meeting extraterrestrial life, if we understand the biblical worldview, as detailed in Scripture. Astrobiology anticipates a megafauna out there but to date has found absolutely nothing.

John Mackay from Creation Research, with Joseph Hubbard his understudy, showed us in his inimitable way the misconception that you need eons of time to form fossils or diamonds or opals or coal, when in fact all you need is the right process and conditions.

In all, over three days, 18 hours of detailed information about our creation, preservation and all the blessings of this life but above all, all pointing to the Word, the Lord Jesus, who created the cosmos and in his inestimable love came in the likeness of sinful man that he might redeem a fallen world to the hope of glory.

Recordings of the talks given by Paul Garner and Stephen Lloyd at the Mega Conference are available on our website. Dr Stephen Bazlinton’s Reformation Sunday sermon, developing themes in his report and delivered just after the Mega Conference, is also available.