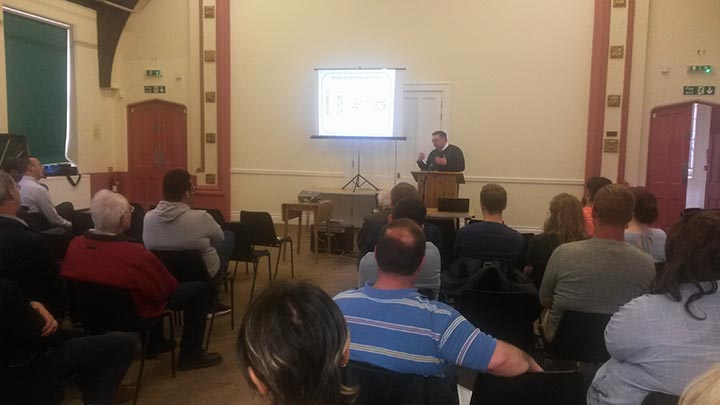 Over the weekend of 20th-21st May I was pleased to be in Cardiff to speak at three meetings arranged by the Cardiff Creation Group.

In the first of two held at Tabernacle Cardiff on the Saturday, I took the subject ‘Adaptation – yes, evolution – no!’ This was a revised version of my previous talk about natural selection and the limit of its effects, i.e. within the Genesis kinds.

After a buffet tea I then gave a brand new presentation, requested for the occasion, entitled ‘Intelligent Design: what's the IDea?’ In this I explained the concept of ID itself, giving examples of irreducible complexity and the challenge of information, as well as tracing the history of its associated movement and assessing its strengths and weaknesses, before using Scripture to reveal who the designer is.

Overall about 40 were present for these sessions, including a number of interested undergraduate students (at least two of biological sciences) and science teachers. There were a number of questions afterwards too, which led to a useful discussion about apologetics and the ethical implications of conflicting worldviews.

Then on the Sunday at Leckwith Gospel Hall I addressed the question, ‘Was there really a worldwide flood?’ We looked at the text of Genesis chapters 6 to 8, scientific evidence consistent with this Biblical account and finally its Gospel application. There were more questions from the congregation afterwards – about time scales, coal and oil, and how evolutionary geologists would explain features consistent with the flood.

Special thanks go to Chris Selby and others from the Cardiff Creation Group for providing these opportunities. 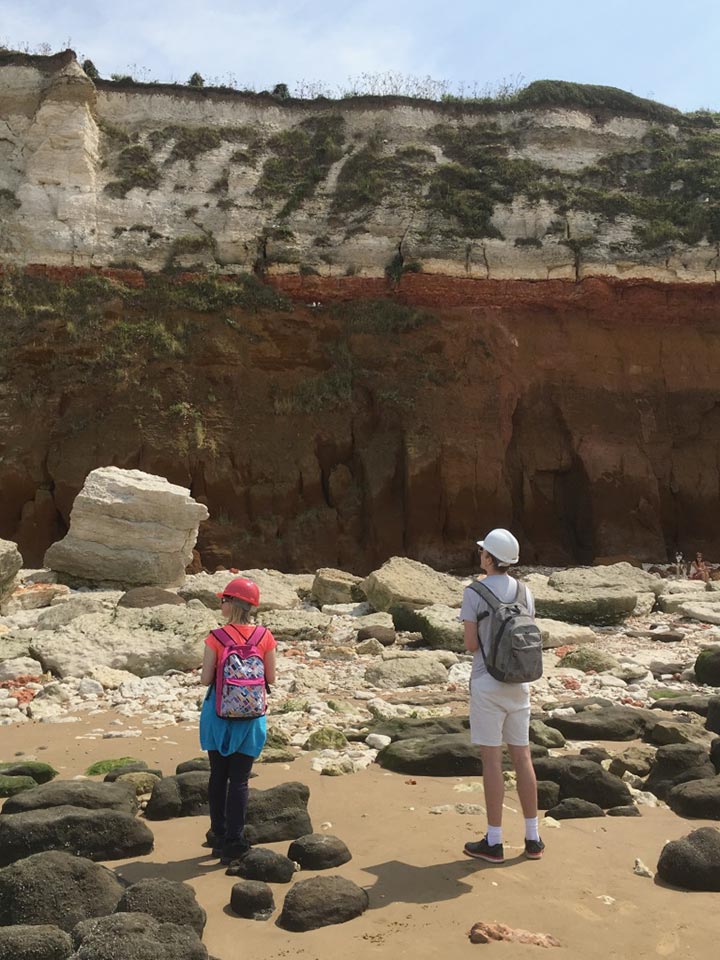 Our student interns on a geology field trip to Hunstanton in north Norfolk.

This summer we hosted another two students on our mentoring programme. One is studying zoology and the other geophysics. Our programme is designed to give students a solid theological and scientific introduction to Biblical Creation and to excite them about the opportunities creation research presents to a young scientist.

Each student was provided with some preparatory reading several weeks ahead. This included a number of papers and articles on topics ranging from the historicity of Adam to plate tectonics to created kinds.

Then in July they joined us for a packed week of tutorials and discussions, supplemented with some practical work, and field trips to a natural history museum and to some coastal rock exposures.

Afterwards the students told us they had enjoyed the programme and found it very helpful. One said: “I found the course to be very informative and I was free to ask any and as many questions about origins as I could think of.” The other said: “I have learnt the importance of taking the Bible seriously when developing scientific models, and also the importance of community.”

We intend to provide students coming through our course with continued advice and support. If interest grows, we’d also like to develop our mentoring programme into a summer school we could offer to groups. We’d love to hear from you if you think a student in your church would benefit from this kind of ‘hands-on’ experience. I can be reached at paul@biblicalcreationtrust.org or BCT, PO Box 325, Ely, CB7 5YH. 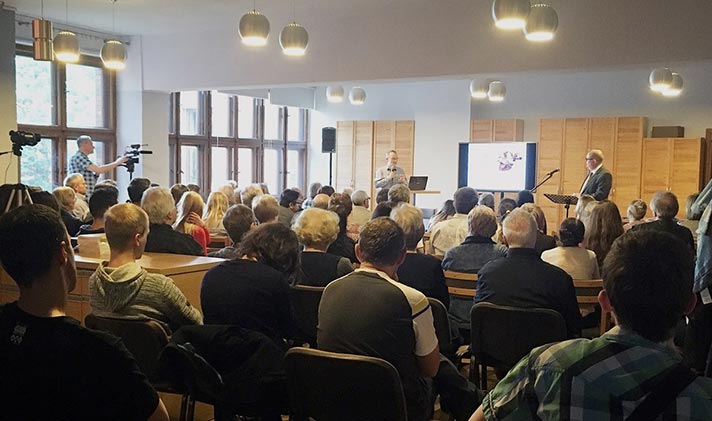 Paul Garner speaking about human fossils at the Baptist Church in Wrocław.

Somewhat belatedly, here’s a report of my ministry trip to Poland, which took place 13th–18th May. The first couple of days were based in Świdnica, in the Silesian region of south-western Poland, and the last day or so in Poznań, in the west-central Greater Poland region.

I flew into Wrocław airport, arriving late on Saturday evening. My first engagement was preaching in the Sunday morning service of the Pentecostal Church in Świdnica. I took as my theme ‘First Adam, last Adam’ based on 1 Corinthians 15:45. After the service, I enjoyed lunch with the pastor, his wife and friends from the Polish Biblical Creation Society (Biblijne Towarzystwo Kreacjonistyczne).

On Monday I had the opportunity to speak to about 40 students and staff at the Ark Christian school in Wrocław. The youngsters were 13-15 years old and very engaged with the subject, ‘Why I’m a creationist’. The talk was followed by about 45 minutes of questions and answers, but we could easily have gone on longer!

The next evening I gave a talk on ‘Ape-men, ancestors and Adam’ to a good-sized crowd at the Baptist Church in Wrocław. My talk examined the human fossil record and how we can make sense of it from a creationist perspective. The evening ended with another useful discussion time.

On Wednesday we travelled to Poznań, where Campus Crusade for Christ hosted a public lecture in one of the university buildings, also on ‘Ape-men, ancestors and Adam’. As well as answering questions from Christian students, there was also the opportunity to engage with one or two sceptics that came along.

Thanks are owed to all those involved in organizing and hosting my visit and to all the supporters that faithfully pray for my ministry, whether at home or overseas. 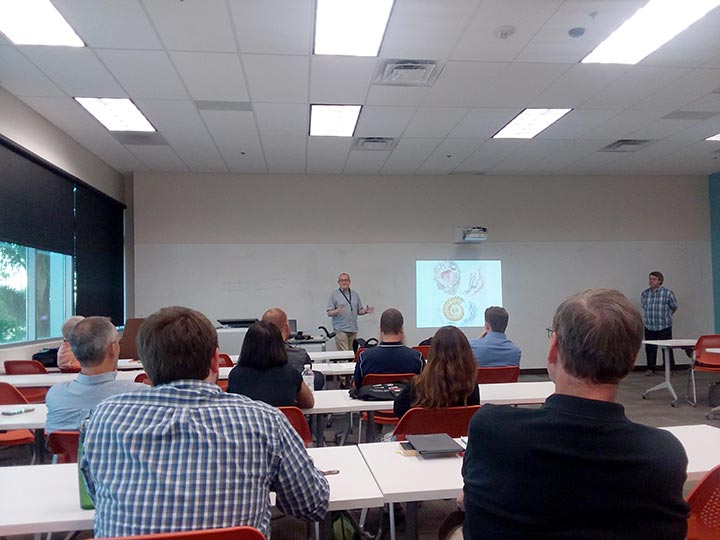 Paul Garner and Todd Wood leading a discussion at Origins 2017.

Origins 2017, the annual meeting of the Creation Biology and Creation Geology societies, took place 19th–22nd July at San Diego Christian College, California. The meeting is an opportunity for creationist researchers to share their work with their peers and to enjoy fellowship together.

For me the visit to California began with a trip to San Diego Zoo with Todd and Stephanie Wood of Core Academy of Science. The zoo was enormous and housed an impressive array of animals from orangutans and giraffes to pythons and gharials.

The conference proper began with dinner on Wednesday evening. All day Thursday was devoted to technical talks. Here are some highlights: 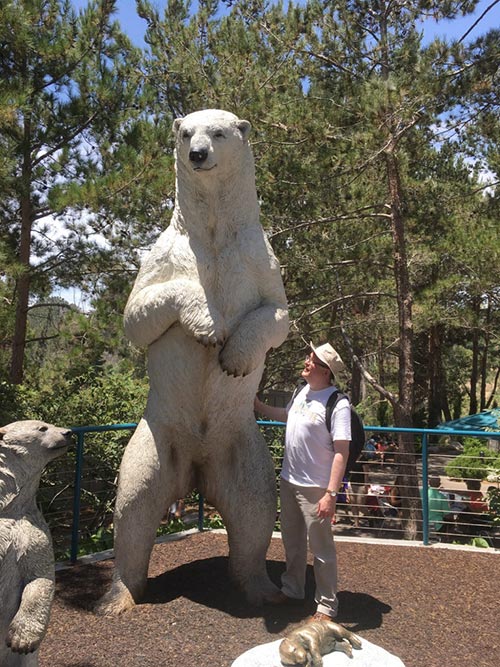 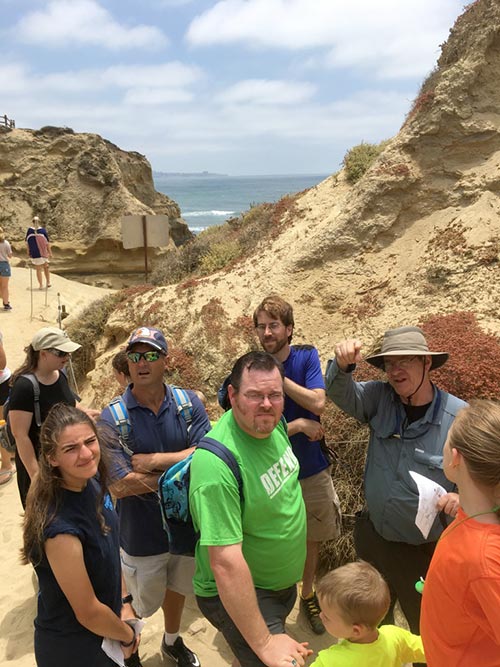 On Friday delegates enjoyed a field trip to the Birch Aquarium at Scripps Institution of Oceanography, La Jolla. Here we were able to handle anemones, urchins and sea cucumbers in the tidal pools, as well as see a variety of marine animals in the aquarium itself, including moray eels, sharks, jellyfish and sea horses.

The conference concluded on Saturday with a tour of Torrey Pines State Natural Reserve, La Jolla. Geologists John Whitmore and Steve Austin drew our attention to evidences of rapid deposition and erosion in the post-Flood sediments exposed in the coastal park.

After the conference I travelled to northern California to visit some old church friends, and had the opportunity to see a special pterosaur exhibition at the Kimball Natural History Museum in Golden Gate Park, San Francisco.

The annual Origins meeting is always a great blessing, not only for the opportunity to hear about cutting-edge research and to participate in discussions. The meeting is also a place where relationships can be built and new research collaborations forged. Although there were fewer attendees this year – and fewer presentations – it was encouraging to see new faces at the meeting and especially to see many young people attending. Some were undergraduates, some doing PhDs, some early-career researchers. Please pray that these conferences will help to captivate this upcoming generation of creationists with the joy and excitement of doing science to the glory of God our Creator and Redeemer.

He defines a new term “Chronological Creationism” to describe a biblical methodology that leads to his creationist position. Using this methodology he sets out the immense theological problems of attempts to reconcile the chronology of evolutionary history with the Bible. The paper then considers the negative apologetic implications of abandoning the Bible’s chronology. Finally Steve outlines the model-building approach necessary to produce a scientific account of earth history consistent with the Bible.

This is the most comprehensive, freely available explanation of our Biblical Creation ethos. Why not read it for yourself and pass onto others who would benefit in your church? Is this something a student or pastor you know would find helpful?

Is Genesis History? A night at the movies 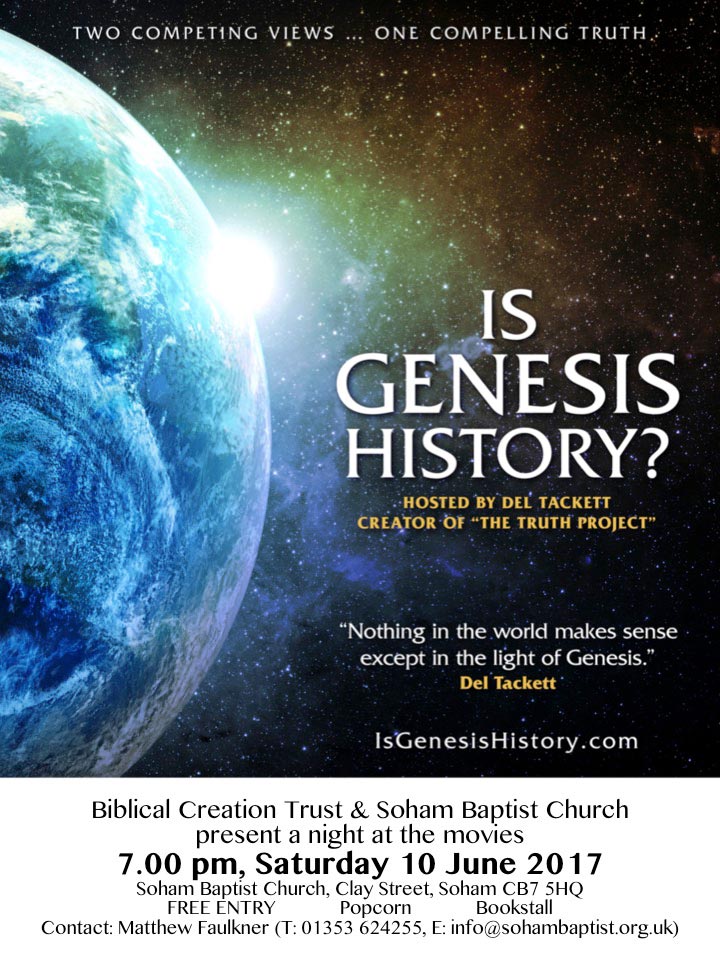 Soham Baptist Church will be the next venue for the showing of Is Genesis History?

We are delighted to announce another showing of the hit new movie Is Genesis History? at Soham Baptist Church, Clay Street, Soham, Cambridgeshire CB7 5HQ at 7.00 pm on Saturday 10 June 2017.

Is Genesis History? is a fascinating new look at the biblical, historical and scientific evidence for Creation and the Flood. Learn from more than a dozen scientists and scholars as they explore the world around us in light of Genesis. The official website and trailer can be viewed here.

All are welcome to this free event. The church contact is Matthew Faulkner (Telephone: 01353 624255; E-mail: info@sohambaptist.org.uk).

In addition to the movie showing, there will be a bookstall – and popcorn! We hope to see you there.

UK premiere of Is Genesis History? 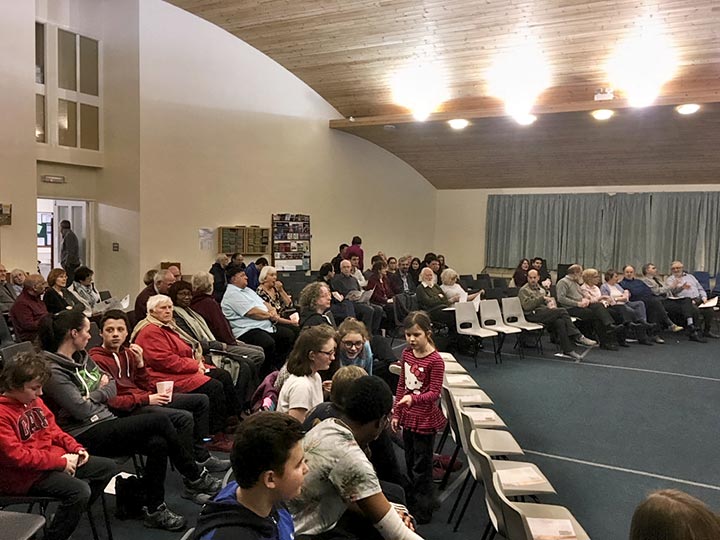 Little Hill Church was the venue for the UK premiere of Is Genesis History?

About 70 people came to see the film at Little Hill Church in Wigston, Leicester, and were greeted with popcorn and other refreshments on arrival.

Paul Garner of BCT introduced the film, which features more than a dozen scientists and scholars making the biblical, historical and scientific case for Creation and the Flood.

Responses to the film were very positive and interest was expressed in showings at other venues – so watch this space for further news on that front!

In the meantime, the official website and trailer for Is Genesis History? can be viewed here. 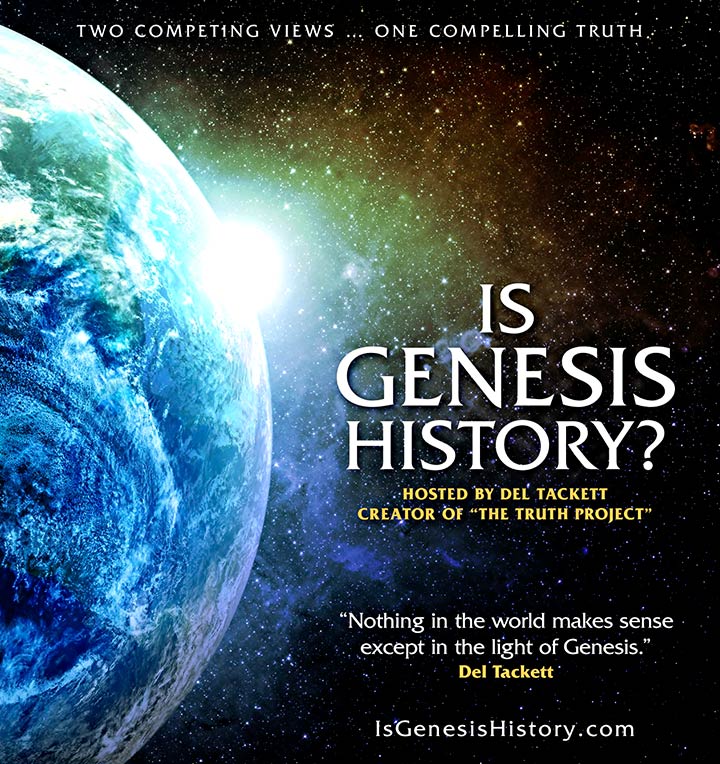 Announcing the UK showing of Is Genesis History? – the new movie that’s just premiered in the USA.

We are excited to announce a UK showing of Is Genesis History? – the new movie that last Thursday was Number 1 in the USA, seen by more than 143,000 people in over 700 cinemas.

Is Genesis History? is a fascinating new look at the biblical, historical and scientific evidence for Creation and the Flood, featuring more than a dozen scientists and scholars. The official website and trailer can be viewed here.

This special one-night only event is being hosted by Little Hill Church, Launceston Road, Wigston, Leicester LE18 2GZ at 7.00 pm on Saturday 18 March 2017.

All are welcome – but the church would appreciate expressions of interest in order to gauge numbers. Please contact Pastor Josh Harrison (Telephone: 07743 760756, E-mail: mail@littlehill.org.uk).

In addition to the movie showing, there will be a bookstall – and perhaps even some popcorn! We hope to see you there. 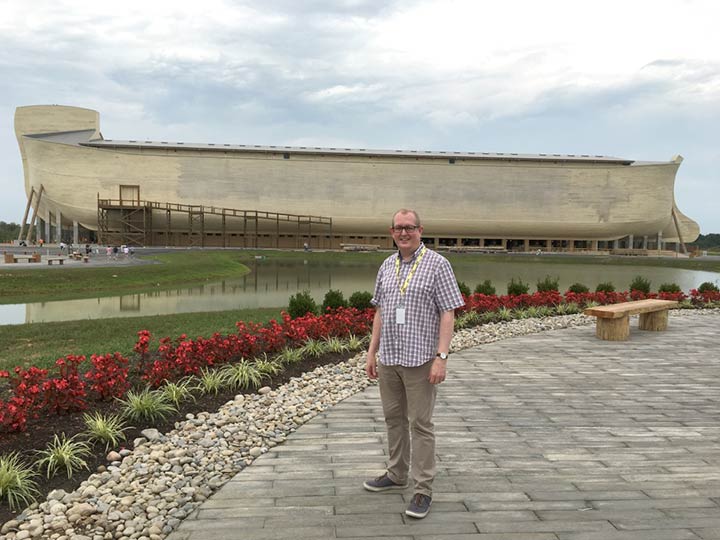 The February 2017 edition of Evangelical Times is a special issue celebrating 50 years of the newspaper’s publication. It features an article by Paul Garner reviewing ‘50 years of creationism’ (pp.5, 13).

In the article Paul points out that young-age creationism is not new, despite efforts by its critics to explain it away as a modern theological aberration. The article also traces the worldwide growth of the creationist movement over the last half-century and looks at the movement’s future prospects.

The article can be read online and subscription details for the newspaper can be found here.