The First Conference on Creation Geology, hosted by Cedarville University in Ohio, took place between 26-28 July 2007. Two days of the conference were devoted to technical presentations and one day to general presentations open to the public. There were also field excursions to nearby Ordovician and Silurian localities.

Dr Andrew Snelling has written a brief report of the conference here and the abstracts of all the presentations will be made available on the Cedarville University website.

A report by Sylvia Baker 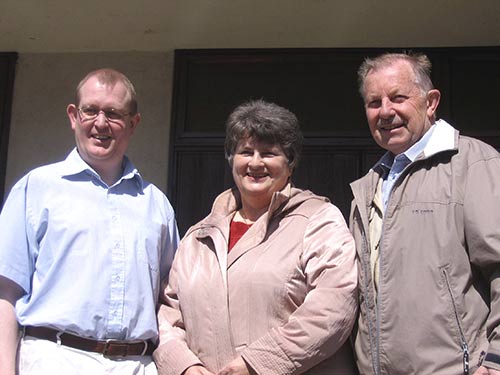 
In April this year, Paul Garner and I had the privilege of spending a week in Poznań at the invitation of the newly-formed Biblical Creation Society of Poland. We addressed numerous meetings arranged by the society, including a special evening meeting for teachers and a day conference for church leaders. The latter was particularly encouraging, as some of the forty leaders who attended had travelled long distances, from as far away as Warsaw and Wrocław. We also spoke on separate occasions to the children, teachers and parents of a small Christian school which opened in Poznań last September. For three days of our visit we were joined by Professor Werner Gitt of Germany, who spoke about his research on information theory.

On one occasion, we visited the neighbouring town of Środa to take advantage of a most unusual opportunity. Local believers had organised an evening meeting in the hope of attracting local students. Through the good influence of a well-known former student, we were invited to tour the equivalent of the local sixth form college, going into every class to speak briefly about ourselves and about why we would like the students and their teachers to attend our meeting later that day. We estimated that in this way we were able to address about 200 students and ten or so staff. There was one member of staff in particular, a biology teacher, who challenged us and was obviously troubled by what we had said. When the time for the meeting arrived, we were delighted to see about 100 people there, most of them students from the college. Our biology teacher was there as well and she provided some lively debate during the question time.

The main event of the visit was a conference held over three successive evenings. The society had advertised this very widely putting up well-designed posters all over the city, especially in departments of the local University. On average about 100 people attended each evening, many of them unbelievers. Again, the profile was of a relatively young group, including a number of students. This ability of the local creationists to attract the interest of young people contrasted strongly with our situation in the UK. We were also very impressed with how much was achieved by such a small group of people. The Society, which came into existence formally just three months ago, at present has just 16 members!

One aspect of our visit was a great blessing to me personally. I was aware that a Polish edition of Bone of Contention had been published in about 1990, but I was not prepared for what I heard about how widespread the influence of the book had been. Everywhere I went, believers approached me to say that they had read it. Often they had a well-thumbed copy in their hands which they would ask me to sign. I was told by numerous people that this had been the first, and for a long time virtually the only, creationist literature in Poland after communism fell. Eventually, Paul and I were told a particularly dramatic story. Apparently, the translation and publication of Bone in Polish was organised from the city of Krakow. Scientific consultants were used who worked in the local University, in the Institute of Geology and their names were listed on the title page just inside the front cover. It was not long before their colleagues at the University discovered this and for months attempts were made to force those involved out of their jobs. Fortunately, the persecution was unsuccessful.

A conference is already planned for Poznań in April 2008 and this time the organisers would like to repeat it in Warsaw. Their zeal is a challenge to us!

An interview with BCM speaker, Paul Garner, was published in the Salvation Army newspaper, The War Cry, on 24 March 2007. It was also featured on The War Cry website.